Leukemia and lymphoma are two related types of blood cancer which currently affect an estimated 65,000 Canadians and account for nearly half of all childhood cancers. This research project aims to target activation-induced cytidine deaminase (AID), a zinc metalloenzyme that has been heavily implicated in the poor disease progression of both lymphoma and leukemia. AID is a member of the APOBEC (apolipoprotein B mRNA editing enzyme, catalytic polypeptide-like) family of cytidine deaminases, and is a DNA-editing enzyme that plays a key role in antibody diversification. It acts by deaminating deoxycytidine to deoxyuradine in hotspot regions of single-stranded DNA within immunoglobulin (Ig) loci, initiating both somatic hypermutation (SHM) and class-switch recombination (CSR). When acting on-target, it is essential for producing high-affinity antibodies. However, AID activity is not restricted to Ig loci and its off-target activity has been implicated in the development and progression of lymphoma and leukemia. 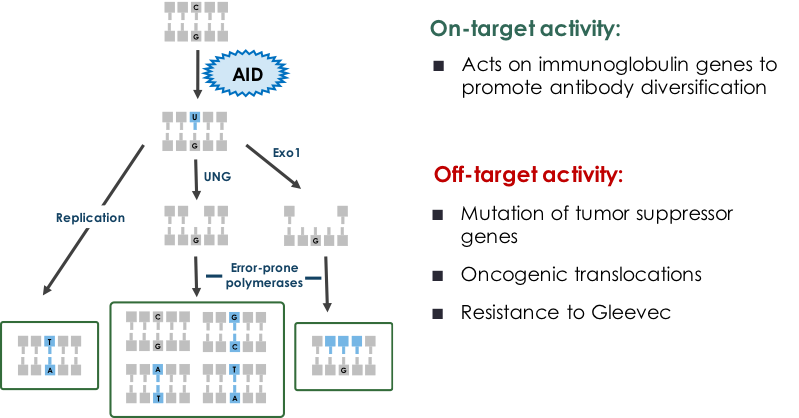 In collaboration with researchers at Simon Fraser University, we are applying computational modeling to aid in the optimization of two preliminary inhibitors of AID. We have employed in silico combinatorial chemistry to generate libraries of analogues for docking studies in order to identify the most promising compounds for testing. Our docking program Fitted has been specifically developed to accurately model metal-ligand interactions, and has been used to identify modifications that will improve the affinity of the initial hits. Synthetic methodology is currently being developed to prepare the initial hit compounds and their analogues for experimental testing. Concurrently, virtual screening has also been used to identify additional hit compounds, focusing on compounds that form a strong covalent-like interaction with the zinc ion present in the active site.